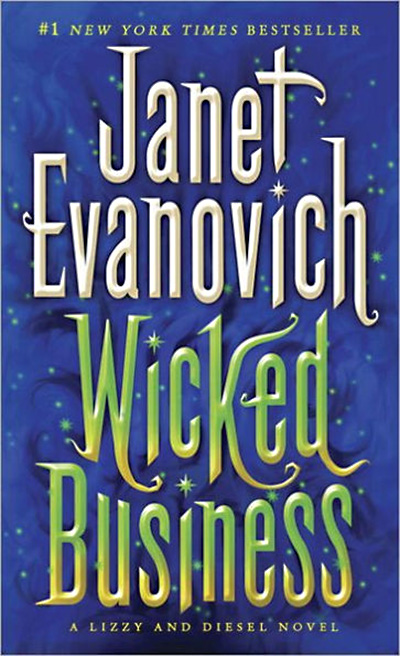 My name is Lizzy Tucker, and I used to think I was normal. My hair is blond with some chemical assistance. My eyes are brown from my Grandpa Harry. I’m 5’5″ tall, and my breasts measure more than my waist so I’m a happy camper. I had a mildly embarrassing childhood free from any truly significant disasters. I -wasn’t
a cheerleader or the prom queen. I -didn’t graduate with honors. I chose culinary school after high school, where I limped my way through butchering beasts and excelled at baking cakes. I was engaged and disengaged. Good riddance to him. In January, three days after my -twenty–eighth birthday, I inherited a house from my Great Aunt Ophelia, and I took a job as pastry chef at Dazzle’s Bakery in Salem.

For five terrific months, I felt like my life was finally coming together. And then two men and a monkey dropped into my world and changed it forever.

One of the men is called Wulf, short for Gerwulf Gri–
moire. He’s eerily handsome, with midnight black, -shoulder-
-length hair that waves over his ears. His skin is pale, his eyes are dark, and his intentions are even darker. The other guy is big and scruffy, and beach bum blond. He has a hard muscled body, a questionable attitude, and a monkey named Carl. The big, scruffy guy is unexplainably charming, and he has only one name . . . Diesel.

The men are my age. And according to Diesel, we’re part of a loosely organized band of humans with abilities beyond the ordinary. I don’t entirely believe all this, but I don’t disbelieve it, either. I recognize that some people are smarter, braver, stronger, can sing better, are luckier than others. So who’s to say some people don’t have abilities just north of normal. I mean, it’s not like he’s telling me he’s Superman from the planet Krypton, right?

This is my first October in New -En-gland. I still love my job and Ophelia’s small, -two–bedroom saltbox that sits on the crest of a hill overlooking Marblehead Harbor. The house was built in 1740 and over the years has had some renovation, with varying degrees of success. It’s a little lopsided and the windows -aren’t plumb, but it has a working fireplace, and from day one it’s felt like home.

Usually, I work from five in the morning until one in the afternoon, but today I had the day off. Rain was slanting against my kitchen windows, and the ancient maple in my backyard rattled in the wind. I was in the middle of chopping vegetables for soup when my back door blew open and Diesel stepped into my tiny mudroom. He was wearing motorcycle boots, -washed–out jeans, a T‑shirt that advertised beer, and an unzipped gray sweatshirt. He had a -two–day beard, his hair was thick and unruly and wet from the rain, and he was sex walking.

“I need you to come with me,” Diesel said. “Some guy just got pitched off his -fourth–floor balcony, and Wulf is involved. There’s a rumor going around that -Wulf’s got a lead on another SALIGIA Stone. I imagine this murder fits in somehow.”

The story Diesel tells is that seven ancient stones hold the power of the seven deadly sins. They’re called the Stones of SALIGIA, and if you combine them in the same vessel you get -really bad juju going . . . like hell on earth. Some people believe the stones have found their way to Salem. Wulf happens to be one of those people, and he’s made it known that he wants them. Since Wulf is thought to inhabit the dark side from time to time, Diesel has been bestowed the responsibility of preventing him from collecting the stones.

“Ordinarily, I -wouldn’t mind tagging along,” I said to Diesel, “but I’m making soup.”

“Okay, let’s take a look at what we’ve got. You can stay here and make soup, or you can go with me and save mankind from getting chucked into Satan’s stew pot.”

I blew out a sigh. Having special abilities sounds good on paper. And there are some people, like Wulf, who might enjoy the power those abilities bring, but I found the gift to be an awkward burden. I get that someone has to save mankind from the big stew pot in hell, but why me?

“To tell you the truth, I’ve never -really bought into the whole SALIGIA thing,” I said to Diesel. “And I truly don’t feel equipped to save mankind.”

“You have a critical ability I lack,” Diesel said. “You’re one of only two people who can sense objects related to the SALIGIA Stones.”

“And you think I’ll have to use that ability at this crime scene?”

“Probably not,” Diesel said, “but you’re cute. And if I have to go look at some idiot who -face–planted onto the sidewalk in the rain, I’m taking you with me.”

“Yeah. Can you hurry it up here, please?”

It’s sort of alarming that I can be so easily swayed by a compliment, but there you have it. I scooped the chopped vegetables into my soup pot and clapped a lid on it. I grabbed my purse off the kitchen counter, snatched a hooded sweatshirt off a peg next to the door, and stepped outside.

The cloud cover was low, the rain was turning to a drizzle, and there was a chill in the air. There were still boats on moorings in the harbor below my house, but their number was significantly decreased from the summer crush. It was definitely fall in New -En-gland.

Diesel opened the white picket fence gate that led from my small backyard to the alley where he was illegally parked. He was -driv-ing a red Jeep Grand Cherokee that -wasn’t new and -wasn’t old. Usually, it was -mud–splattered and coated in road dust. Today, the rain had washed the top layer of dirt away and it looked almost clean.

I slid onto the -passenger–side seat, buckled myself in, and realized Carl was in the back. Carl looked up at me, gave me a finger wave, and smiled a horrible monkey smile. All monkey gums and monkey teeth and crazy bright monkey eyes.

I grew up in suburbia. We had cats, dogs, hamsters, guinea pigs, parakeets, and fish. Never a monkey. A monkey was a new, sometimes disturbing experience.

Diesel drove down Weatherby Street to Pleasant, Pleasant turned into Lafayette, and Lafayette took us to the bridge that crossed into Salem. We followed traffic through the center of town, cut off to the north side, parked behind a police cruiser on Braintree Street, and made our way over to where a small crowd was gathering.

This was a mixed neighborhood of commercial and residential. Cop cars, a truck belonging to the medical examiner, and an EMT truck were angle parked in front of a -seven–story, yellow brick condo building that looked like it had been built in the seventies. Crime scene tape cordoned off an area in front of the building, and a makeshift screen had been erected, preventing gawkers like me from seeing the body sprawled on the -rain–slicked pavement. Thank heaven for the screen. I -didn’t want to see the dead guy.

“Do you know his name?” I asked Diesel.

“Gilbert Reedy. He’s a professor at Harvard. My source tells me Reedy came flying through the air and crash landed with a handprint burned into his neck.”

I felt my breakfast roll in my stomach, and my upper lip broke out in a sweat. “Oh boy,” I said. “Damn.”

Diesel looked down at me. “Breathe. And think about something else.”

“How can I think about something else? There’s a dead man on the ground, and he has a handprint burned into his flesh.”

“Okay, baseball. Am I playing or watching?”

Diesel tipped his head back and looked up at a shattered slider, leading to a postage-stamp-size balcony on the fourth floor. I looked up, too.

“I know of only one person who can channel enough energy to leave a burn mark like that on someone’s neck,” Diesel said.

“So you think Wulf pitched Reedy through the window and off the balcony?”

“Everything points to that, but it would be out of character for Wulf. Wulf likes things neat. And this is messy. I can’t see Wulf throwing a guy out a window . . . especially in the rain.”

“Yeah. That would be more me.”

I scanned the crowd on the other side of the crime scene and spotted Wulf. He was standing alone, and he was impeccably dressed in black slacks and sweater. He -didn’t look like a man who not so long ago threw someone out a window. His hair was swept back, and his dark eyes were focused on me with an intensity that made my skin prickle.

I felt Diesel move closer, his body touching mine, his hand at my neck. A protective posture. Wulf nodded in acknowledgment. There was a flash of light, some smoke, and when the smoke cleared, Wulf was gone.

“He’s been doing the smoke thing ever since he went to magic camp in the third grade,” Diesel said. “It’s getting old. He -really needs to get some new parlor tricks.”

Diesel and Wulf are cousins. They’re related by blood, but separated by temperament and ideology. Diesel works as a kind of bounty hunter for the regulatory agency that keeps watch over humans with exceptional abilities. Wulf is just Wulf. And from what I’m told, -that’s almost never good.

“Now what?” I asked Diesel. “Are you going to tell the police?”

“No. -That’s not the way we do things. Wulf is my responsibility.”

“Yeah, I’m behind the curve on this one.”

I saw a flash of brown fur scuttle past me, and Carl crawled under the tarp that screened the body.

“I thought you locked him in the car,” I said to Diesel.

“What the heck?” someone yelled from the other side of the tarp. “Where’d the monkey come from? He’s contaminating the crime scene. Somebody call animal control.”

Diesel slipped under the tarp and returned with Carl. We hustled back to the car, we all got in, and Diesel took off down the street.

“He’s holding something in his hand,” I said to Diesel. “It looks like a key.”

Carl put it in his mouth and bit down. “Eeee!”

I traded him a mint, and I took the key. It was sized to fit a diary or journal, and it was intricately engraved with tiny vines and leaves.

“Is this yours?” I asked Diesel.

“No. He must have picked it up off the ground.”

“Maybe he got it off Reedy. Maybe he snatched it out of his pocket.”

“I took a look at Reedy, and he -didn’t have pockets. He was only wearing boxers and one sock. I guess he could have had the key stuck up his nose or inserted south of the border.”

I took hand sanitizer out of my purse and squirted it onto the key. Diesel cut across a couple streets, found Lafayette, and turned -toward Marblehead.

“If we were done, I’d be on a beach in the South Pacific. I thought we’d go back to your house so you can finish your soup and I can do some research on Gilbert Reedy.”

Wicked Business  Copyright © 2012 by Evanovich, Inc. Printed in the United States of America. No part of this book may be used or reproduced in any manner whatsoever without written permission except in the case of brief quotations embodied in critical articles or reviews. For information address Random House, Inc., 1745 Broadway, New York, N.Y. 10019