Out with the Old, Inn with the New, Chapter Two 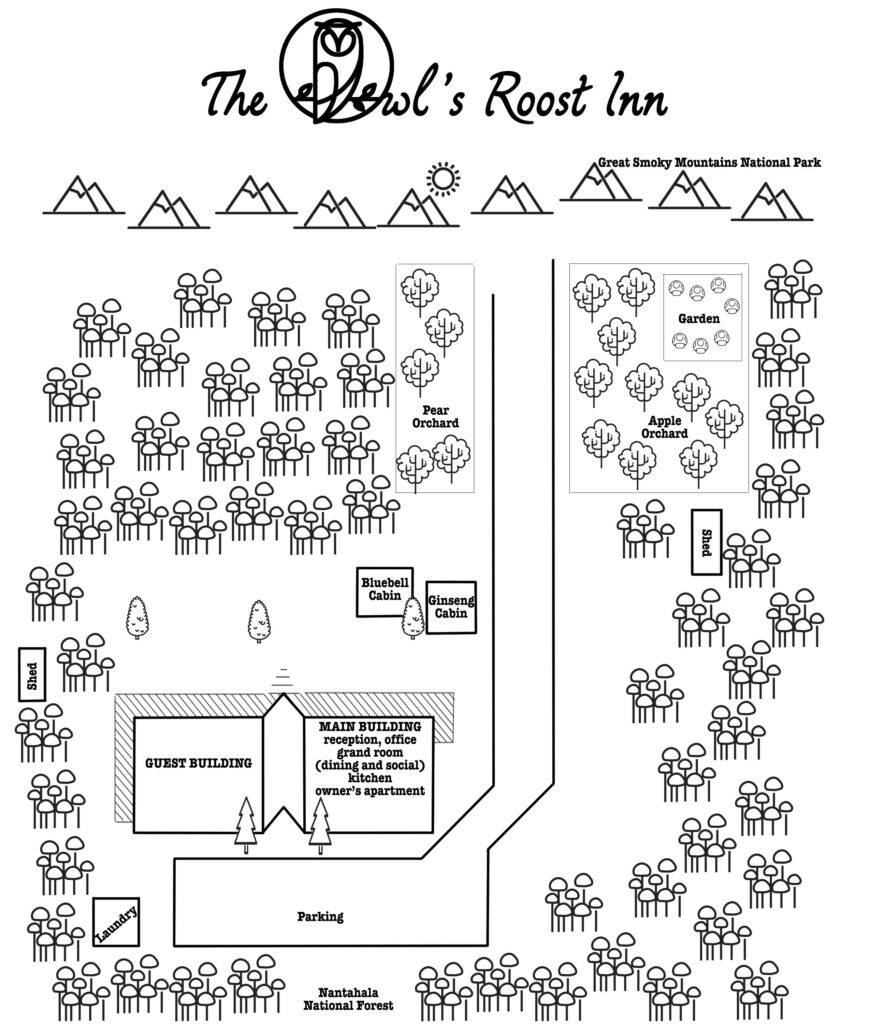 Elphin held open a door that had “reception” burned into its wood, in block letters.  Eve and Tess passed through, and entered a cozy, rustic lobby.  Near the door, walking sticks lined a wall next to a wooden bench.   Above the walking sticks hung a bulletin board with bear safety pamphlets pinned to it.  Directly across from the entrance was reception’s check-in desk, with a live edge wood counter.  To the right of the desk was a hallway, and to the left was a door that read “employees only”.   The door gave access to the back of reception, and an office.

“You’ll find a narrow stairway at the back of the office,” Elphin said.  “The stairs will take you up to the owner’s apartment.”

They followed the short hallway from the lobby to the great room.  It was filled with tables and comfy couches.  A large, two-sided, stone fireplace dominated the middle of the room.  Vintage prints of the Great Smoky Mountains National Park and the Blue Ridge Parkway hung on the walls.  Bookcases were filled with books and maps for hiking and exploring the area.  Floor to ceiling, paned windows lined the wall on the far side, giving a stunning view of the surrounding mountains.

“This room also serves as the dining hall,” Elphin explained.  “Not sure what you have planned, but Fannie mostly did buffet style.  A continental type of breakfast and a simple, southern comfort-food dinner.  Guests could request a paper bag lunch, if they were going to spend the day hiking.  Cookies and iced tea were usually set out during the day.”  He pointed toward the back corner of the room.  “The large swing doors will take you to the kitchen.  It’s been recently renovated and has a door that exits close to the parking lot, for deliveries.”

Tess’s second husband, Jack, had been the chef at his own restaurant.  Eve was banking on Tess having picked up some sort of knowledge about cooking and serving during those two years with him.  Lord knows she hadn’t picked up any housekeeping skills throughout any of her three marriages.  The latest divorce papers referred to Tess as a “domestic nincompoop”.

“The residents and staff will be happy to hear we have a chef,” Elphin said.  “It’s been mostly hotdogs and Fruit Loops since we lost Fannie.”

Eve leaned in a bit. “Residents?”

“Residents.  Long term guests.”  Elphin shrugged.  “Depends on how you want to look at it.  On the plus side they are steady income for The Roost.”

“What’s the negative side?”

Elphin smiled.  Eve wasn’t sure if it signaled charm or trouble.  “They expect coffee every morning.  There are only two of them, and for the most part they’re easy.  I’ll make sure you meet everyone.  Vincent Blair lives in a downstairs unit of the building next door.  He’s 64, retired, and has been here three years.  He had some sort of agreement with Fannie for room and board.  I’m sure you can find it in the books.  Julie Spartan lives in the attic unit of the same building.  She’s in her thirties and currently living off a trust fund.  She’s been here almost a year.  For staff there’s Todd and Irma Jones.  Todd is in charge of housekeeping and Irma helps in the kitchen.  They’ve been working here for about two years and live in one of the units in the Ginseng cabin.

“If you should ever need me in the middle of the night, I live in the upstairs half of the Bluebell.”  There was the smile again.  “The owner’s apartment is upstairs, in this building.  There are two bedrooms.  Plenty of space if you’re going to be roommates.  I’ll help you bring your things in and show it to you.  It’s pretty nice.  Todd made sure there was fresh bedding and towels this morning.”

Eve was having heart palpitations.  She was moving into full on panic mode.  She hadn’t planned on anyone actually living at The Inn.  She had planned on having at least a couple of weeks to figure things out.

“Thanks.  I think we’ll be fine unpacking and settling in on our own.  I’m not sure how much Fannie told you about me.  To be honest, I never really knew Fannie.  She was my grandmother’s best friend.  Or so I was told.  And to be even more honest, you should know I lack a certain amount of experience in the hospitality and service industry.”

Elphin’s mouth dropped open.  He blinked once. “How much experience are you lacking?”

“Well, I did waitress for a year in college.”

Eve waved her hands.  “Don’t panic.  I have my Masters from B.U.  I worked in accounting for two years, but I couldn’t take the cubicle and I really couldn’t take Jeremy Farfel.”

“What was wrong with Jeremy Farfel?”  Elphin asked.

“He was a mouth breather.  Can you imagine spending all day in a windowless cubicle trying to concentrate on math listening to MWEHHH… MWEHHH?  It was maddening!  So, I found a job in marketing.  I’m actually surprisingly good at it, and I had that job up until they fired me.”

Elphin was speechless.  Unfortunately for Eve, Tess was not.

“That’s nothing,” Tess said.  “On the same day Eve got fired, her boyfriend dumped her with a Dear John letter supposedly written by his cat.”

Eve’s eyes went to slivers.  “I hope Chowmein chokes on his cat food.”

Elphin couldn’t believe what he was hearing.  The girl was a mess.  Totally desirable, but a mess.

“I can do this,” Eve said.  “I promise.  I just need some help getting started.  I didn’t know there were already people living here.  And this clearly isn’t Boston.  And I just need someone to let me know the schedule and what needs to be done and when.  I’m good at organizing, I’m great with lists and I can manage money.”

“Fair enough,” Elphin said.  It wasn’t as if he had any other options.  “Tess, let me know if you need help in the kitchen.  When it comes to meals, the residents and staff can fend for themselves until you get settled.  Guests have been cleared out until we get closer to Halloween.  I’ll meet you both in the orchard at seven, tomorrow morning.  We’ll start picking apples, so Tess can get going on pies.  The locals…”

“Yeah.  The apple harvest is a big deal for The Roost.  A lot of locals will venture up the mountain to buy whatever you make.  Apple crisp, apple turnovers, apple pie, and if you want to, we can even make a little apple cider.”

Tess’s face had glazed over.

Elphin hung his thumbs in his tool belt.  “Fannie left all of her recipes in a big book in the kitchen.  Just in case you don’t want to use your own.”

“Probably a good idea to not change things up.  Right, Tess?”  Eve said.

It was time to hurry the niceties along, Eve thought.  “Okay, so seven a.m. apple picking.  Feels very fallish.  We’ll see you then.”

Tess and Eve watched through the large windows as Elphin made his way to the Bluebell cabin.  He stopped when he reached the stairs leading up to his unit and looked up at them.

“Do you think he’s onto us?” Tess asked.

Elphin climbed the stairs and entered his loft apartment.  It had exposed wooden beams in the ceiling, a kitchenette, big bed and a small sitting area with a corner, stone fireplace.  Tall, narrow windows looked out over the mountains and the field below.

He removed his tool belt, went straight to the mini fridge, found a cold bottle of beer, popped the top and downed half of it.  What had Fannie been thinking leaving The Owl’s Roost to Eve Jensen?  Actually, he suspected he knew exactly what Fannie had been thinking.  Fannie loved a risk, and Eve Jensen was a risk worth taking, just like he had been.  And the more he thought about Eve, because it was hard not to, the more his confidence rose in her and the less panicked he felt.  Okay, so she clearly knew nothing about running an inn, but she seemed smart and enthusiastic.  She claimed to be organized and capable of keeping the books, and he suspected she had one or two more skills there waiting to be discovered.  If nothing else, the next few months at The Owl’s Roost Inn were going to be fun.

Elphin stared out his window.  If it doesn’t go right, he thought, I’m going to miss this view.  So will the rest of the Roost’s residents and staff, because I’m going to have to find them new homes. 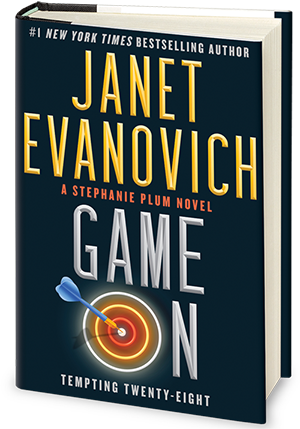