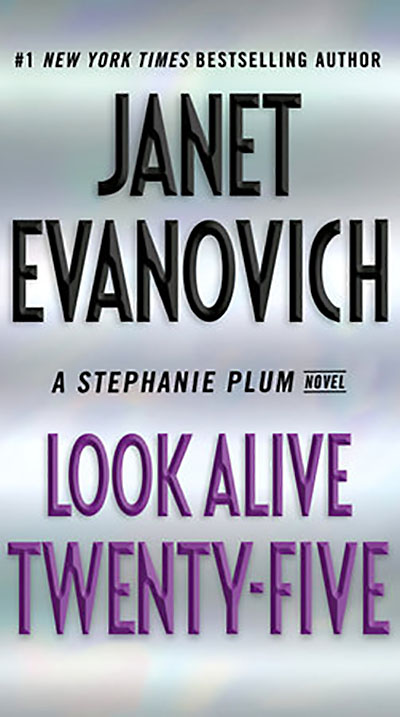 VINCENT PLUM BAIL Bonds is one of several storefront businesses on Hamilton Avenue in Trenton, New Jersey. It’s run by my cousin Vinnie and owned by his wiseguy father-in-law, Harry the Hammer. Connie Rosolli is the office manager. My name is Stephanie Plum, and my official title is bond enforcement agent. I’m assisted by Lula. We’re not sure exactly what Lula does, and we’ve never been able to come up with a title for her.

Connie, Lula, and I were looking out the big plate glass window at a Chevy Bolt parked at the curb. It was a small car overstuffed with large women.

“Do you know who’s in that car?” Lula asked Connie.

“She used to be a man,” Connie said, “but Vinnie stayed with her through the transition.”

“Good for him,” Lula said. “He’s always been open- minded anyways. He didn’t even care what sex that duck was.”

The women got out of the car and marched into the office. Madam Zaretsky had jet-black hair pulled back in a bun. Her lipstick was blood red. Her nails were creepy long and matched her lips. She was wearing a black bandage dress and spike-heeled black pumps. Little Sally wasn’t all that little. She was a plump five-five with a lot of frizzy red hair, an abundance of boob, and legs like tree trunks. The bookie was almost seven feet tall in heels. She was tastefully dressed in a pale-yellow sheath dress and patent nude pumps. Her makeup was understated. Her hands were big enough to palm a basketball, and she had gym monkey muscles.

The bonds office consists of a reception area with Connie’s desk and some uncomfortable seating choices.  Vinnie’s private lair is off to one side, and a large storeroom stretches across the back of the building.

The three women sashayed over to Vinnie’s office, but before they reached his door I heard Vinnie throw the bolt to lock them out.

“I know you’re in there, Vinnie,” Zaretsky said. “Open the door.”

“Vinnie!” Zaretsky said. “Open this door or Sally is going to kick it in.”

“Makes sense,” Lula said. “Sally’s the one in combat boots. You don’t want to kick a door down wearing Louboutins. You could ruin them doing something like that.”

Sally gave the door a good kick with her boot heel, but the door didn’t budge.

She took a silver-plated Glock out of her handbag and squeezed off a shot. The round ricocheted off the door and took out Connie’s desk lamp.

“His door’s got a steel core,” Connie said.

Zaretsky put her gun back in to her bag. “You tell that weasel we want our money.”

Connie gathered up the desk lamp pieces. “I’ll pass it along.”

“C’mon, girls,” Zaretsky said. “We have better things to do than to hang here all day.”

Zaretsky motioned for no one to say anything, and the women flattened themselves against the wall on either side of the door.

After a couple minutes, Vinnie opened the door a crack. “Are they gone?” he asked.

The women pushed the door open and stormed into the inner office. Vinnie shrieked and tried to scramble around his desk, but the bookie grabbed him.

In a very ladylike fashion, the bookie wrapped her hands around Vinnie’s ankles and effortlessly held him upside down about a foot off the floor.

Vinnie is five foot nine and slim. His black hair is slicked back and wouldn’t move in hurricane-force winds. His pants are narrow-legged and tight across his butt. His shirts are shiny and fit like skin. His complexion is Mediterranean. His dick has an adventuresome spirit and is most likely hideously diseased.

The bookie shook Vinnie up and down as if he was trying to empty Vinnie’s pockets, but Vinnie’s pants were too tight for anything to fall out.

“Tell Connie to give you the petty cash,” Vinnie said. “It’s all I’ve got.”

The bookie dropped Vinnie, and the three women went to Connie.

Zaretsky signed the receipt and took the cash. “This isn’t nearly enough,” she shouted to Vinnie. “We expect payment in full by the end of the week, or we’re going to your wife. And until you pay up you’re cut off from services.”

The women turned, huffed out of the office, got into the little car, and sped off.

“How old do you think Madam Zaretsky is?” Lula asked.

“She’s in her sixties,” Connie said. “Vinnie’s been with her for a long time.”

“She’s in good shape,” Lula said. “She’s got excellent biceps. Must be from all that whipping she does.”

Vinnie was on his feet. “What the hell were you thinking?” he yelled at Lula. “Why did you tell them I was in my office?”

“You need to pay the ladies,” Lula said. “It’s not good to stiff service providers. And you better shape up, because Madam Zaretsky said she was going to your wife next.”

“Maybe if you two loser enforcers would actually make a  capture I could pay the ladies,” Vinnie said. “It’s like I’m running a charity bailout here. How about if you stop snarfing those donuts on Connie’s desk and make a feeble attempt to haul in Victor Waggle. Is that too much to ask?”

“How about if I rearrange your face so your nose is in the back of your head?” Lula said.

Vinnie closed his door and slid the bolt.

“Failed to appear for court on Friday. High bond. Nutcase.  Stabbed two people on State Street and urinated on their dog.”

“That’s a terrible thing to do,” Lula said. “It’s not nice to urinate on a dog. I hope that dog’s okay. What kind of dog was it?”

“What about the people?” I asked.

“Waggle said he was having a bad day.”

Connie handed his file to me, and I paged through it. Photo of a guy with crazy bugged-out eyes and punked-up hair. Twenty-three years old. Eye color red. Hair color black. Had a tattoo of a snake coiled around his neck.

“Did anyone else come in?” I asked Connie.

“Annie Gurky didn’t show for court on Friday. She’s a low bond. Shoplifting while drunk and disorderly. And Wayne Kulicki. Eat and Go shorted him on his fries, so he destroyed the place.”

“I’ve been shorted on fries there too,” Lula said. “It’s the drive-t hru window. They always screw you over at the drive-thru window.”

Connie handed me the two additional files, and I organized all three in order of difficulty. I’d go after Annie Gurky first, Wayne Kulicki second, and hope Victor Waggle got run over by a truck before I started searching for him.

Vinnie popped out of his office again. “And don’t forget about the deli.”

Vinnie narrowed his eyes at Connie. “Didn’t you tell them about the deli?”

“I was getting to it,” Connie said.

“Well, get to it faster,” Vinnie said. “It’s not gonna run itself.” Vinnie retreated back into his office.

Lula and I looked over at Connie.

“You remember Ernie Sitz,” Connie said. “He skipped out on a racketeering charge last year.”

“He’s still in the wind,” I said. “The rumor is that he’s in South America somewhere.”

Connie nodded. “One of his many businesses was Red River Deli. He used it as collateral on his bond, and two weeks ago Vincent Plum Bail Bonds was awarded ownership.”

“Red River Deli,” Lula said. “It does a good lunch trade. It’s in one of them gentrified high- crime areas.”

Vinnie reappeared. He had his arms wrapped around a paper grocery bag, and he had a Red River Deli ball cap on his head.

“I got your uniforms here,” Vinnie said to Lula and me. “Aprons and ball caps.”

“Harry has decided he needs to diversify,” Connie said. “He’s not going to sell the deli. He’s going to keep it and run it.”

“Harry wants to keep the businesses under one umbrella,” Vinnie said. “So, he’s made Stephanie deli manager, and you’re the assistant manager.”

“I don’t know anything about running a deli,” I said. “And when am I supposed to do this job?”

“The deli doesn’t open until noon,” Vinnie said. “It’s not like a grocery deli. It’s more of a restaurant deli. You’ve got a couple line cooks and a waitress who do all the work. You just have to keep things running nice and smooth. You start today.  The keys are in the bag. Deli opens at noon, but the cooks come in at ten.”

“You’ll get five hundred dollars a week plus lunch,” Vinnie said to me.

“You get lunch,” Vinnie said. “You already draw a salary for doing nothing.”

“Works for me,” Lula said. “I like lunch. It’s one of my favorite things.”

I’m five foot seven with blue eyes, shoulder length curly brown hair, and a body that won’t get me a job walking the Victoria’s Secret runway but is good enough to get me a boyfriend. Lula is two inches shorter than me and has a lot more volume. Much of the volume is in boobs and booty, giving her a voluptuousness that would be hard to duplicate with surgery. Lula achieved her voluptuousness the old-fashioned way. Pork chops, fried chicken, biscuits and gravy, tubs of mac and cheese and potato salad, barbecue ribs, chili hot dogs. Her hair was magenta today. Her skin is polished mahogany. Her dress and five-inch stiletto heels are from her Saturday night ’ho collection and two sizes too small. The overall effect is spectacular, as usual.

I stuffed the new files into the deli bag, and Lula and I headed out.

“I think we should take your car,” Lula said. “I just had my baby detailed, and that neighborhood is gentrified from what it used to be but that don’t mean it’s perfect.”

Lula’s baby is a shiny, perfectly maintained red Firebird with a sound system that could shake the fillings loose from your teeth. My car is an ancient faded blue Chevy Nova. It has a lot of rust, and a while back someone rudely spray-painted pussy on it. I covered the writing with silver Rust-Oleum glitter paint that was on sale. Unfortunately, I didn’t have enough paint to cover the whole car.

I got into the Nova and pulled the Gurky file out of the bag.

“We don’t have to be at the deli until ten,” I said to Lula. “We have time to do a drive-by on Annie Gurky. According to her file she lives in an apartment complex in Hamilton Township. Married with two adult children. Age seventy-two.”

“What did she shoplift?”

“A box of Tastykake Butterscotch Krimpets, a family-size bag of M&M’s, a carton of Marlboros, two bags of Fritos, and a box of Twinkies. Apparently, she had them shoved into her tote bag and walked out of the store. An employee chased her across the parking lot, and she punched him in the nose.”

“Did she drive away?” Lula asked.

“No. The police report says she couldn’t remember where she parked her car. She was working her way through the box of Butterscotch Krimpets when she was arrested.”

“Well, at least she’s got good judgment when it comes to dessert. You can’t do much better than Tastykakes and Twinkies.”

Look Alive Twenty-Five Copyright © 2018 by Evanovich, Inc.
Printed in the United States of America. No part of this book may be used or reproduced in any manner whatsoever without written permission except in the case of brief quotations embodied in critical articles or reviews. For information address G. P. Putnam’s Sons, an imprint of Penguin Random House LLC, 1745 Broadway, New York, New York 10019