To get your free, signed, bookplate for The Bounty send a self-addressed and stamped envelope (regular business size) to:
Evanovich Bounty Bookplate
PO Box 2829
Naples, FL 34106 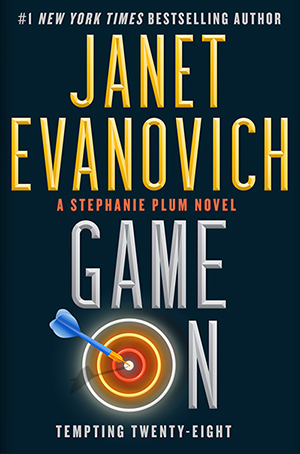 The clock on my bedside table said it was 2:00 a.m. Lights were off in my small apartment and my bedroom was totally dark. Something pulled me out of sleep and now I was in bed, awake and terrified. I was listening to someone moving around in my living room. My gun was in the brown bear cookie jar in the kitchen. My cell phone was charging in the bathroom. I kept a two-pound Maglite next to my clock, and at the moment it was the closest I could come to a weapon.

My name is Stephanie Plum and I’m a bail bonds enforcement agent. It’s the sort of job that might require self-defense skills like kung fu and eye gouging, but I’m not proficient in either. I coerced my cousin Vinnie into hiring me during a time of desperate unemployment and to date I haven’t migrated on to a better job.

I heard the intruder walk into my bedroom and drop something heavy onto the floor. I fought through the panic, clicked my flashlight on, and pinned the beam to a face. I recognized the man and went breathless for several beats before getting my heart under control.

“Yeah. You want to drop the beam a little, so I don’t go blind.”

Diesel is over six feet of hard muscle and bad attitude. He has sun-bleached hair that’s thick and unruly, talents that are difficult to explain, and a job that’s similar to mine but on an international level. Hell, for all I knew he worked at an intergalactic level.

“You scared the beejeezus out of me,” I said. “What are you doing here?”

“I got dropped off here. I’ve got a job in Trenton. Lucky me. That’s sarcasm in case you didn’t figure it out. I’m beat. It was a long trip.”

“Where did you come from?”

He kicked his shoes off. “Bangkok.” He stripped off his T-shirt and dropped his jeans.

“I always sleep here when I’m in town.”

“Twice. Three times, tops, and I didn’t want you in my bed then, either. And I haven’t heard from you in what… two years?”

“Has it been that long?”

“I have a boyfriend. He doesn’t like when I have other men in my bed.”

“It isn’t still the cop, is it? Bordatello?”

He dropped his briefs, and I snapped the flashlight off. “Would it be asking too much for you to at least leave some clothes on?”

“Yeah, it would be asking too much.”

“Sleep on the couch.”

“Terrific. I’ll sleep on the couch.”

I got out of bed, grabbed my pillow, and ripped the quilt off the bed.

“Your loss,” Diesel said. “And you need to do something about the cranky attitude.”

I slammed the bedroom door shut and carried my stuff to the couch. “One night and you’re out of here!” I yelled back at him.

I have a long relationship with my current boyfriend, Joe Morelli. And I have an unconventional relationship with a security expert named Ranger. My relationship with Diesel defies description. I suppose it’s more of an occasional friendship of convenience than a relationship. Kind of like a stray cat that shows up every two years, invites himself into your home, eats your food, and stays just long enough for you to get used to him. Truth is, I know shockingly little about Diesel.

Diesel sauntered out of the bedroom into the kitchen, squinting against the early morning sunlight. He was dressed for the day in jeans, scuffed brown leather boots, and an untucked gray T-shirt advertising tequila. He tapped on the glass aquarium that was home to my hamster, Rex, received no response, and moved to the coffeemaker.

“Is there anything alive in the cage?” he asked.

Diesel took a mug from the over-the-counter cupboard and filled it with coffee. “I’m looking for a loser named Oswald Wednesday, also known as O.W. I don’t suppose you know him.”

“I absolutely know him. Vinnie posted a bail bond for Oswald, and he didn’t show up for his court appearance. I’ve been looking for him for two weeks now and I have nothing.”

“What’s the charge on Oswald?”

“He broke into a townhouse that was rented to a cop and he came out on the losing end of a wrestling match. Oswald said it was mistaken identity, but he was charged with breaking and entering and assault with a deadly weapon. He was armed with a gun and a knife. He got released on a high bond. Why are you looking for him?”

“He’s hacking into a system that’s supposed to be secure. I work for one of the involved parties.”

“The IT people found his digital footprint. Now it’s my job to physically find him.”

“Are the police involved?”

“No. This is a private problem.”

“Who is your employer?”

Diesel smiled. “I’d tell you but then I’d have to kill you.”

It was a clichéd line, but I got the point.

“What do you know about Oswald?” Diesel asked me.

“He’s fifty-two years old, five foot nine inches, black hair pulled into a ponytail, medium build, gave us an address of a short-term rental on Dugan Street. He hasn’t been seen in the neighborhood since he was arrested. I wouldn’t be happy if you snatched him up and whisked him away before I could collect my recovery money.”

“Understood. Maybe you should rethink letting me live here.”

“I don’t need the recovery money that bad.”

“You don’t know how to share an apartment. You take it over. You have no sense of personal space or privacy. You always have to get your own way and you have a problem understanding the concept of no.”

“That’s the tip of the iceberg. You can’t stay here. It’ll be uncomfortably crowded in my bed when Morelli sleeps over.”

“I’ll concede that one.”

I poured coffee into a to-go mug and grabbed my messenger bag and a sweatshirt.

“I have to go,” I said. “Things to do. Make sure the door is locked when you leave.”

I live in a one-bedroom apartment on the second floor of a three-story apartment building. It sits on the edge of Trenton proper, making it a twenty-minute drive to the bail bonds office, my parents’ house, my boyfriend’s house, and my favorite bakery. I took the stairs instead of waiting for the elevator, exited through the back door, and crossed the parking lot to my previously owned, slightly dented Ford Focus.

I wasn’t entirely comfortable leaving Diesel alone in my apartment but I was a working girl and I needed to check in at the office.

Game On/Tempting Twenty-Eight Copyright © 2021 by Evanovich, Inc.
All rights reserved, including the right to reproduce this book or portions thereof in any form whatsoever. For information, address Atria Books Subsidiary Rights Department, 1230 Avenue of the Americas, New York, NY 10020.