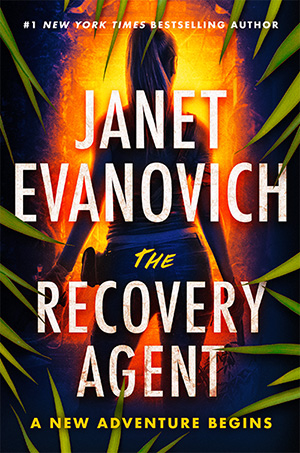 Gabriela Rose was standing in a small clearing that led to a rope-and-board footbridge. The narrow bridge spanned a gorge that was a hundred feet deep and almost as wide. Rapids roared over enormous boulders at the bottom of the gorge, but Gabriela couldn’t see the river because it was raining buckets and visibility was limited.

She was deep in the Ecuadorian rain forest. Her long dark brown hair was hidden under an Australian safari hat, its brim protecting her brown eyes from the rain. She was a martial arts expert. She ran five miles every morning. She was a crack shot and a gourmet cook. None of these skills were keeping her dry. She was wet clear through to her La Perla panties. Her camo cargo pants and Inov-8 Bare-Grip hiking shoes were caked with mud. She was carrying a Glock .38 in a Ziploc bag tucked into a hip pocket. Other pockets held her passport, a folding Buck knife, and moisturizing lip gloss. Her daypack held a useless waterproof poncho, protein bars, her Ziploc-bagged cell phone, and assorted other necessities for jungle trekking.

She was with two local guides, Jorge and Cuckoo. She guessed they were somewhere between forty and sixty years old, and she was pretty sure that they thought she was an idiot.

“Is this bridge safe?” Gabriela asked.

She looked at Cuckoo.

“You first,” she said to Jorge.

Jorge did another shrug and murmured something in Spanish that Gabriela was pretty sure translated to “chickenshit woman.”

Let it slide, Gabriela thought. Sometimes it gave you an advantage to be underestimated. If things turned ugly, she was almost certain she could kick his ass. And if that didn’t work out, she could shoot him. Nothing fatal. Maybe take off a toe.

It had been raining when she landed in Quito two days earlier.

It was still raining when she took the twenty-five-minute flight to Caco and boarded a Napo River ferry to Nuevo Rocafuerte. And it was raining when she met her guides at daybreak and settled into their motorized canoe for the six-hour trip down a narrow, winding river with no name. Just before noon, they’d pulled up at a crude campground hacked out of the jungle. They’d immediately left the river behind and followed a barely there trail through dense vegetation. And it was still raining.

“Insurance Fraud Investigator” was printed on Gabriela’s business card, and she had an international reputation for excellence in the. field. As an independent contractor she had the luxury of accepting jobs not related to insurance fraud, whether because they paid well or because they were fun. Her current job had checks in both boxes.

She’d been hired to find Henry Dodge and retrieve an amulet he was carrying. She didn’t have a lot of information on the amulet or Dodge. Just that he couldn’t leave his jobsite, and he’d requested that someone come to get the amulet. Seemed reasonable since Dodge was an archeologist doing research on a lost civilization in a previously unexplored part of the Amazon Rain Forest. The payoff for Gabriela was a big bag of money, but that wasn’t what had convinced her to take the job.

She was possibly a descendant of the infamous pirate Blackbeard, and she was fascinated by seventeenth- and eighteenth- century pirates and the civilizations they touched. The opportunity to visit the site of a lost city was irresistible. It was also her thirtieth birthday. What better way to celebrate it than to have an adventure?

“How much further?” she asked Jorge.

Twenty minutes later, Gabriela set foot on the dig site. She’d been on other digs, and this wasn’t what she’d expected. There was some partially exposed rubble that might have been a wall at one time. A couple of tables with benches under a tarp. A kitchen area that was also under a tarp. A stack of wooden crates. A trampled area that suggested it might have recently been used as a site for several tents. Only one small tent was currently left standing.

There were no people to see except for one waterlogged and slightly bloated man lying on the ground by the rubble, and a wearylooking man sitting on a camp chair. The first was clearly dead. The second stared at them as they approached.

“This is not good,” Jorge said. “One of these men is very dead and something has eaten his leg.”

“Panther,” the man in the chair said. “You can hear them prowling past your tent at night. This site is a hellhole. Were you folks just out for a stroll in the rain?”

“I was sent to get an amulet from Henry Dodge,” Gabriela said. “I believe I was expected.”

The man nodded to the corpse. “That’s Henry. Had some bad luck.”

“He was checking on an excavation in the rain first thing this morning, fell off the wall, and smashed his head on the rocks. Then a panther came and ate his leg before we could scare it away. Everyone packed up and left after that. Too many bad things happening here.”

“But you stayed,” Gabriela said.

“They couldn’t carry everything out in one trip. I stayed with some of the remaining crates and the body. Cameron said he would be back with help before it got dark.”

“Do you know where Henry kept the amulet?” Gabriela asked.

“Usually on a chain around his neck,” the man said. “He felt it was the safest place. Right now, it looks to me like he’s got it in his hand. You can see the chain hanging out and part of the gold trim.”

Gabriela looked at the dead man’s hand. It was grotesquely swollen and clenched in a fist. The amulet was barely visible.

“Someone needs to get his hand open,” Gabriela said.

Gabriela flicked a centipede off her sleeve. She knew the rain, the. mud, the bugs, the sweltering heat were all part of the Ecuadorian experience. The dead man with the swollen hand was not. The question now was, how bad did she want the amulet? The lost-cities site had turned out to be a bust, but there was still a payday attached to the amulet. So, the answer to the question was that she wanted the amulet pretty damn bad. Without the amulet, there would be no big bag of money. She was well respected in her profession, but big paydays didn’t come along every day.

“I’ve come this far,” she said. “I’m not going back without the amulet.” She looked at the man in the chair. “I need to pry Dodge’s hand open. I need gloves and a baggie. Archeological sites usually have them.”

The man shrugged as an apology. “They were all packed out. Truth is, we were shutting down before Henry happened. Henry was the holdout. He found the amulet, and he thought there was more here. The rest of us didn’t care.”

“We need to leave now,” Jorge said. “It will be bad to be in this jungle after sunset. Hard to find the way, and panthers will be hunting at night. We have maybe five hours of daylight left.”

“I’m not leaving without the amulet,” Gabriela said.

Cuckoo took his machete out of its sheath and whack! He chopped Henry Dodge’s hand off at the wrist.

“I suppose that’s one way to go,” Gabriela said. “I would have preferred to try my way first.”

He picked the hand up by the horribly swollen thumb, grabbed Gabriela’s daypack, and dropped the hand in.

“He’s right about the jungle at night,” the man in the chair said.

“If everyone packed out this morning, why didn’t we see them?” Gabriela asked.

“They took the road behind the wall,” the man said. “Forty-five minutes to walk, and it cuts the river trip in half.”

Gabriela looked at Jorge and Cuckoo.

The walk back to the motorized canoe took a little under four hours. Easier going without the rain.

Gabriela stopped at the river’s edge and dropped her daypack. “I can’t take the smell coming out of my pack. One way or another I’m going to get the amulet out of Dodge’s hand,” she said to Jorge and Cuckoo. “Hopefully the swelling has gone down and the rigor has relaxed.”

“Not good to stay here,” Jorge said. “The hand will draw predators.”

“No problem,” Gabriela said. “The predators can have the hand as soon as I get the amulet.”

Gabriela removed a folding Buck knife from her cargo pants pocket and opened the blade. “This shouldn’t take long.” She unzipped the daypack, held her breath against the smell of decomposing flesh, and looked in at the hand.

Jorge and Cuckoo inched away from Gabriela, moving closer to the canoe. Gabriela couldn’t blame them. This was going to get worse before it got better. She was about to do surgery on some necrotic fingers, and it wasn’t going to be pretty. She dumped the hand onto the ground and tossed the pack toward Jorge and Cuckoo.

She didn’t want to grab the hand without gloves, so she stepped on it to secure it and tried to pry the hand open with the knife. No luck. She took a moment to assess the situation.

“I hear something in the brush,” Jorge said. “We should right away go now.”

“We’ve been hearing things in the brush for four hours,” Gabriela said.

“Even worse,” Jorge said. “Could be the panther stalking the hand you are standing on.”

“That’s ridiculous,” Gabriela said. “He would have attacked by now. The brush is filled with small animals doing whatever it is they do.”

As she bent down to try the knife one more time, a panther crept out of the jungle. He was thirty feet away and he was in a crouch. His bright yellow eyes focused like lasers on Gabriela.

Jorge jumped into the canoe and started the engine. Cuckoo was at the bow, pushing off from the bank. Gabriela had her gun trained on the panther.

“Very bad to shoot panther,” Jorge said from the canoe. “They are on critically endangered list.”

Gabriela took two steps back. The panther rushed forward, snatched the hand, and disappeared into the jungle with it.

“I would have shot him,” Cuckoo said.

“We can track him,” Gabriela said. “He won’t eat the amulet. He’ll leave it behind.”

“You track him. We’ll wait here for you,” Jorge said.

They aren’t going to wait, Gabriela thought. They’re going to take off the instant I’m out of sight. I’ll be stuck here with no cell service and no canoe. And by the time I walk back to the dig site tomorrow it’ll be completely abandoned. And the truth is, the cat was terrifying. Magnificent, beautiful, and terrifying. It would be terrible to have to shoot him, and even worse to be his main course after he enjoyed the hand as an appetizer.

The Recovery Agent Copyright © 2022 by Evanovich, Inc.
All rights reserved, including the right to reproduce this book or portions thereof in any form whatsoever. For information, address Atria Books Subsidiary Rights Department, 1230 Avenue of the Americas, New York, NY 10020.